Best Hard Drive For Gaming – Get the Ultimate Gaming Experience

Hard drives are among the most important parts of a computer. Whether you use it for gaming or regular chores, you have to make sure that your computer’s hard drive is high-end if you expect optimal performance. One time my hard disk stopped working in the middle of an online game that I was almost winning, and the sad part was I didn’t just lose the game, I lost all my data as well.

I didn’t have the best hard drive for gaming.
Hard drives manipulate magnetic fields over disks with a magnetic coating to store information. This process is somewhat similar to how video recorders or cassette tapes work. Each hard drive has a different number of discs inside it, which collectively are known as platters. Hard drives with numerous platters have a bigger storage capacity and use both sides of these disks to store data.

Hard drives also contain motors that can spin the disks at speeds ranging from 5,400 to 15,000 Rotations per Minute or RPM. A good gaming hard drive should have a speed of at least 7,200 RPM. The faster your hard drive can spin, the easier it is to access and transfer data resulting in uninterrupted gameplay due to no delays.

However, hard drives are not the same and are separated into two major categories; internal and external hard drives. Here are their differences.

Difference between the internal and external hard disk drive

These two types of hard drives might have many similar features but also share some differences. However, every computer comes with an internal hard drive, and it is up to you to decide whether you want an external hard disk or not. While the purchase might cost you an extra buck, external hard drives may serve as a backup protection to the internal drive and can help free some memory from their counterparts for smoother gaming.

Installing an internal hard drive might require professional assistance if you have never done it before or unwilling to try. Even when doing it personally, it can present some troubling steps considering laptops and computers have different designs. However, an external hard drive can be easily installed; just plug the cable into a USB port and your computer should be able to recognize the hard disk.

Regarding their speed, internal hard disks operate much faster than their external counterparts, thanks to a better connection to your computer and advanced technology. Their connection is also faster because they are directly connected to your computer’s motherboard. As such, data transfer is faster as opposed to external hard drives, which rely on USB cables and ports for connection which may have varied speed.

Aside from these differences, internal and external hard drives have the same functions and boast almost the same features.

Here are some hard drive options to choose from in case you’re thinking of making a purchase.

The BarraCuda 3TB is a SATA internal hard drive with a broad range of features. For a gaming hard disk, the BarraCuda is among the best options considering its large storage capacity. This hard drive is ideal for desktops as well as all-in-one computers and home servers as well. It can also act as an entry-level direct-attached storage device or DAS.

The BarraCuda is inspired by previous models but includes modern features, which enhance its versatility and dependability. They not only make playing games effortless but can also help in storing progress as well as other data such as music, movies, and pictures. This hard drive is also among the most durable thanks to BarraCuda’s tradition of delivering ultra-reliable hard drives for over 20 years. It has a spindle speed of 7,200 rpm and a buffer size of 64MB. It also features one SATA interface that can transfer files at up to 6GB/S. Despite being very durable, the BarraCuda also comes with an excellent warranty to ease your worries regarding malfunctioning. 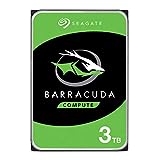 The WD Blue might have a lower storage capacity than the BarraCuda, but its performance is not to be taken lightly. A 64 MB cache contained in this hard drive is more than most gamers need and the 3.5’ Desktop HDD doesn’t require expert installation. This hard drive matches BarraCuda’s speed with 7,200 rpm and has a 3-year data recovery plan.

WD has also been in the market for a long time and as such the company ensures legendary reliability when it comes to their products. This hard drive is no exception considering it has been designed, built, and tested to last for an extended period. The WD Blue is a sixth generation masterpiece that has evolved and now features storage spaces of up to 6TB.

Features such as IntelliSeek, which calculates optimum speeds to reduce power consumption and noise as well as data lifeguard, which uses advanced algorithms to keep this drive’s performance at an optimum state give the WD Blue an edge over most hard drives currently on the market.

The Seagate SATA 4TB Desktop Hard Drive might not match the other two drives discussed above regarding speed (5,900 rpm), but it comes at a lower price. Also, Seagate has been on the market for a longer time (30 years) and as such guarantees more reliability. Not to mention, their designs are simple and compatible with most computers.

This drive has a 6 GB/s SATA interface and AcuTrac Servo Technology from Seagate, which guarantees dependable performance. It is also the first hard drive in the industry with 1 TB-per-disk hard drive technology; a feature which makes data transfer and gameplay very easy. This feature also comes in handy when reducing power consumption both when the computer is I use and when in sleep mode. Aside from gaming, this high-performance hard disk can also be used for video editing and everyday PC tasks such as computing and storage.

The WD Black is a better version of the WD Blue considering it has a bigger storage capacity and incredible performance. This hard drive is specially designed for desktop users who prefer performance as opposed to design. It also comes with a 5-year warranty; enough time to get acquainted with its performance and even forget the type of hard disk you have in your computer.

WD offers three capacities to choose from; Entry level, which has a storage capacity of up to 1TB, mainstream level (2TB TO 4TB), and best upgrade (5TB and over). The WD Black hard drive is also perfect for gamers thanks to its storage capacity, which makes it easy to store and play all your games without any glitches. When combined with an SSD, the WD Black guarantees maximum PC performance no matter the size of the game or graphics contained.

This hard drive also has the edge over its counterparts as far as the read-rate goes thanks to WD’s dynamic Cache Technology, which also aids in improving performance.

Toshiba is among the names that will instantaneously pop up when asked to name several computer brands. Aside from laptops and PCs, the company also manufactures hard drives with the Toshiba 2TB Desktop hard drive among some of their best products. This internal hard drive can reach speeds of up to 7,200 rpm and is compatible with all PCs including Mac and Linux.

Toshiba has been over 40 years in this business, and it’s no wonder this hard drive has features such as built-in shock sensors, which can only be found in high-end hard drives. These sensors detect impact and protect both the drive and the data it contains from any damage. Its features also include an Intelligent SATA interface, which enhances compatibility and internal shock detection as well as ramp-loading, which helps further protect your data and the drive.

With speeds of 7,200 rpm, you don’t have to worry about glitches or slow gameplay when using this hard drive. 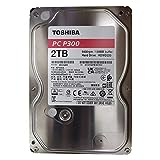 Here are some tips to consider before buying either of these hard drives.

Hard drives can have storage capacities as low as 1GB and as high as 8TB. While an 8TB hard drive is most likely to be external, internal hard drives have upped their storage capacity as well in recent years. Pretty amazing what technology can do, isn’t it? Just the other day a computer was big mainly because of the size of its features such as the hard drive.

Nowadays, some of the latest, lightest, and smallest laptops have a very high storage capacity. It is advisable to buy a computer with a lot of space especially if you are to use it for gaming. Basically, the more files you want to store or the bigger the game’s size and the heavier the graphics, the more storage capacity your hard drive should possess.

The former might be more common than the latter, but its speed is ten times lower than its counterpart’s. eSATA is even a better option compared to these two interfaces, but it tends to be a little more expensive. However, before purchasing a hard drive with a USB 3.0 interface, ensure that your computer has a USB 3.0 port. Not all computers accept hard drives and some models can have irritating transfer speeds due to USB 1.1 or USB 2.0 connection.

Lately, most computers come with hard drives with a SATA interface. However, be sure to check the hard drive’s compatibility with your motherboard before making a purchase.

Brand names might not matter much when it comes to certain items, but with hard drives, they are a defining factor. I remember buying my first hard drive; it was slightly cheaper than some options my friends had recommended but it didn’t last a month. I learned the hard way about all the counterfeit products out there when it comes to computer parts especially hard disks.

Use trusted manufacturers such as Western Digital, Seagate, or Hitachi just to mention a few, to be on the safe side. Also, ensure that your purchase is a Solid State Drive or SSD seeing their storage technology takes loading to incredible levels. They might be a little more expensive than regular hard disks but are worth the extra buck.

While most computers might not have enough storage space to allow you to play certain games, you can upgrade their storage and performance with a better hard drive. However, make sure that the RAM is also big enough for smooth gameplay. A few years back, either of the examples mentioned above would cost you a lot of money, but thanks to technological advancements these hard disk are now affordable. So, go get them.